Today, I would like to write about Dogger, one of the ZOCALO national items from the founding of the brand.


Dauge has a variety of geometries and is said to represent masculine nature in Buddhism. Originally, it came from ancient India to Japan, and Doges,Kongosho (Vajra)in the event of the next one.

Why did this ritual implement be handed down to Japan?
About 1200 years ago, the founder of the Shingon sect, Kobo Daishi, Kukai, and esoteric Buddhism were brought back to Japan from Tang Dynasty China.
One of the 'Esoteric Buddhist tools' that Kukai told Japan to do is Dauge.


Doges appear in the legend of Kukai.
In order to find a suitable place for the spread of Esoteric Buddhism, the three-pronged pestle was thrown from the beach of Meizhou in Tang to Japan.

*This is the picture when Kukai threw it.

And there is a legend that the three-pronged pestle jumped over the sea and caught a pine tree in Mt. Koya. 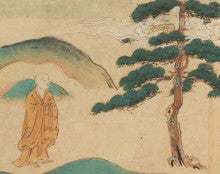 * When Kukai discovers Sankosho (a pestle)

This legend is described as 'Sankosho tosho,' a book called 'Kobo Daishi Gyyojo Ekotoba ' (picture book of Kobo Daishi).
And by the way, these three-pronged pestles are still present, and they are called"Flight trio pestle"It is also called as an important cultural property.

Higyosankosho (three-pronged pestles)
One occurrence of a single occurrence is a special feature.


Now, how is this Mikkyo Esoteric Buddhism tool used as a ritual tool?
Originally, when Buddhism was founded, it is said that the arms of ancient India were transformed into a form of Buddhist altar fittings, and as a weapon, it became a weapon to abort the earthly desires.


Religion also changed the name of the hogu.
In Hindu religion,Vajra
In Buddhism,Vajra
In Tibet EsotericDoge
In Europe and America,ThunderboltThere are various names.


This Thunderbolt is the God of HinduIndraI said to God.The Indra is the thunder god who controls the lightning, and the weapon in his hand is Dogger. And throwing that weapon, Doge, is going to lead to a lightning bolle.
It is a theory called "Sunderbolt".


As you know the various backbones, the attractiveness of the accessory becomes more enjoyable, isn't it?